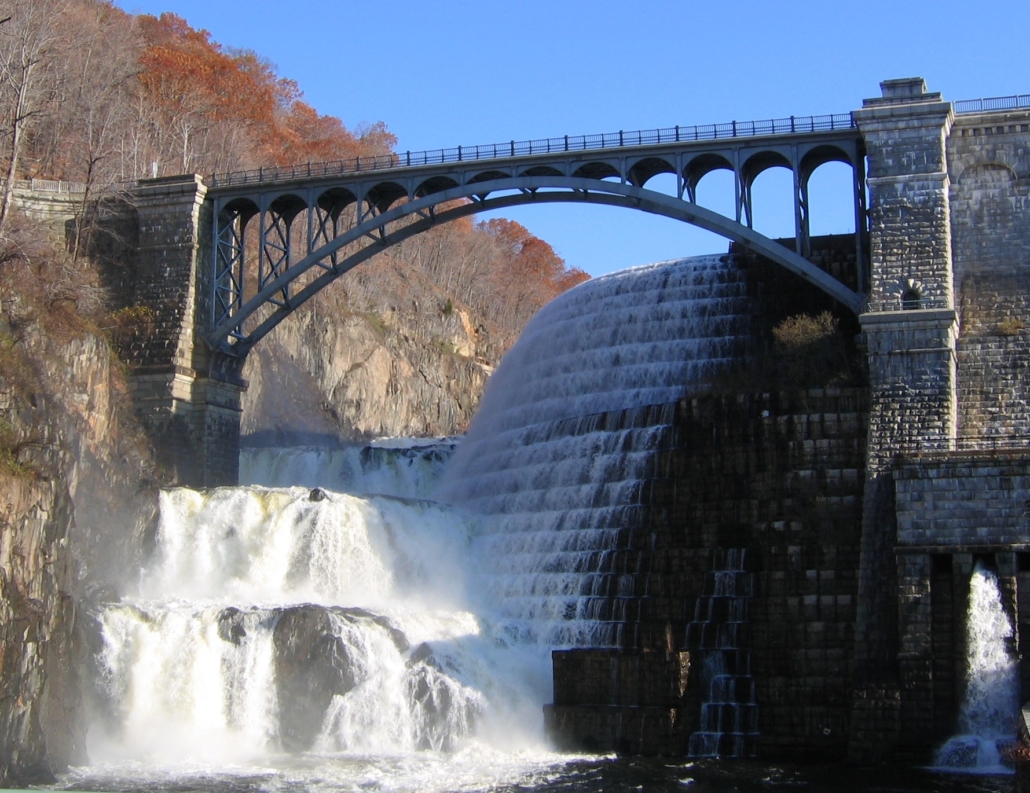 The growth of New York City into the place we all know today has always been linked to the ability to bring fresh water to an urban environment surrounded by salt water estuaries. In the early 19th century, this was a major problem as the city began to push north from its original settlement at the southern tip of Manhattan. At that time water was obtained from wells, many of which were contaminated. This lack of clean water was responsible for both yellow fever and cholera epidemics. Water was also needed for fire suppression. By 1833 it was time for the City to begin work on a new fresh water supply. Nine years later the project would be complete, connecting the Croton Reservoir to the growing city. Today, although the aqueduct is no longer in use, most of its infrastructure is still there. Much of the aqueduct is now a State park (or NYC Park), and the land above it is a fascinating trailway that you can ride your bike on with great views of the Hudson River. The Old Croton Aqueduct Trail (OCA) goes across the Highbridge – one of the nicest car-free bridges in our region. The OCA is also a great way to get to the new Mario M. Cuomo Bridge Bike Path. 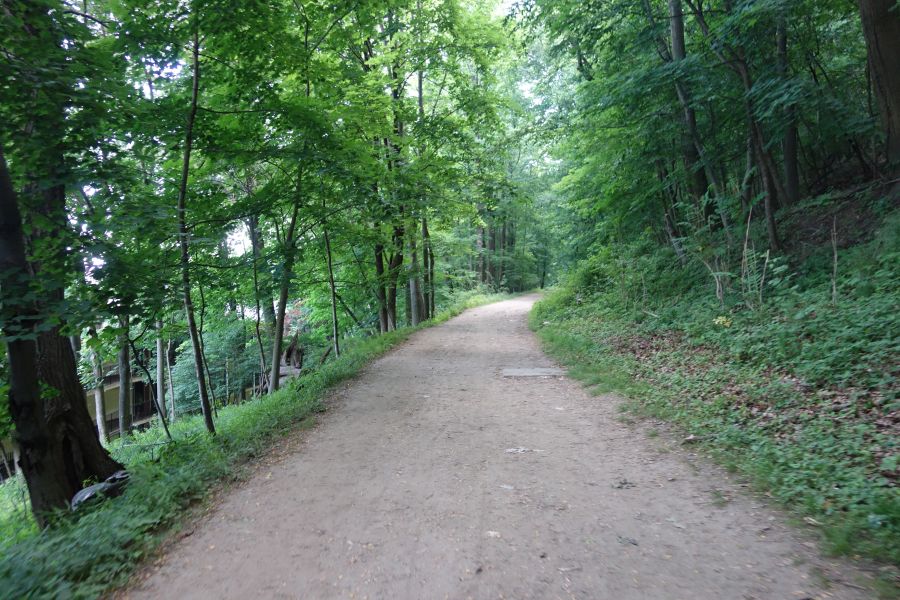 The OCA trail is unpaved for most of its length. This is one of the wider (and smoother) parts. You should ride this with a hybrid or mountain bike.

While the initial aqueduct was 41 miles long going between the Croton Reservoir in Westchester County and the Croton Distributing Reservoir (now the site of the New York Public Library on 5th Avenue and 42nd Street) the 26-mile portion in Westchester County is the part we will be discussing below. This is the most contiguous part of the trail that offers the best riding.  While portions of the OCA trail in New York City are spectacular (like the Highbridge) the route isn’t contiguous or clear.

No matter which portion of the OCA Trail you want to ride, we highly recommend purchasing a map from the Friends of the Old Croton Aqueduct for $5. This map will show you the exact route, which can be confusing and hard to follow for the uninitiated. But once you’ve ridden it, you’ll see why it was worth the effort.

The OCA trail can be narrow at times and you will have to follow small signs to stay on the route.  We definitely recommend buying a map for $5.

The Westchester portion of the OCA Trail is almost entirely unpaved. You will need to watch out for bumps, roots, rocks, mud and debris. Some portions are wider than others, and the route is almost entirely shaded. Peek through the trees and you’ll see great views of the Hudson River and the Palisades throughout most of your ride. You’ll also see many, many remnants of the aqueduct, like ventilation towers, weirs and more. But make no mistake, the trail can be rough. So do not attempt this trail with a road bike. Hybrid or mountain bikes are a must! 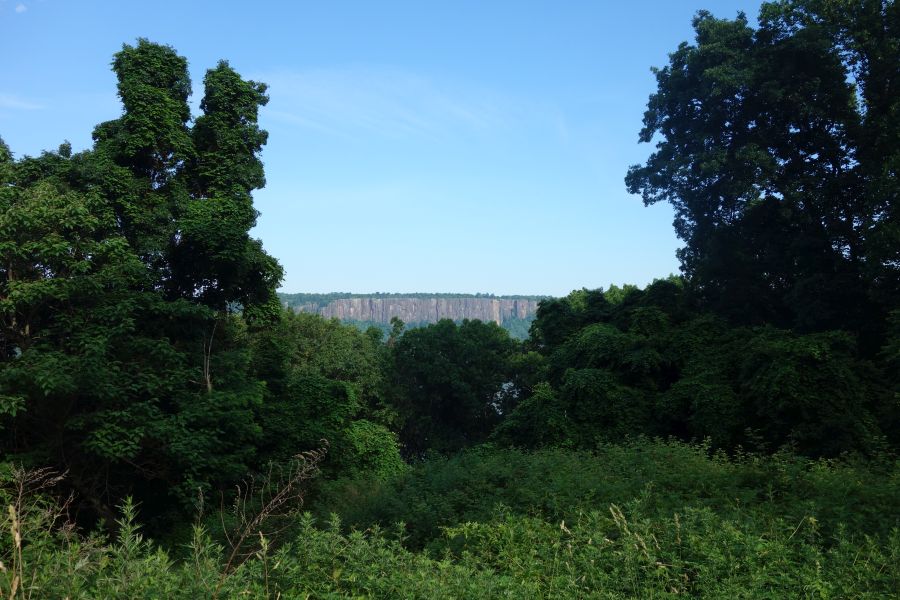 One of the many views you’ll get of the Hudson River or the Palisades while riding the OCA trail.

There are numerous access points to the OCA Trail from its many street crossings. The OCA once flowed through every riverfront village or town in Westchester between Yonkers and Croton-on-Hudson. This means that the trail offers direct access to downtown areas in Hastings-on-Hudson, Dobbs Ferry, Irvington, Tarrytown, Sleepy Hollow and Ossining and it is also very close to downtown Yonkers and downtown Croton-on-Hudson. All of these areas have Metro-North train stations, so you can easily do a ride that starts in one place and ends at another. And that also makes this trail easy to get to from the city. 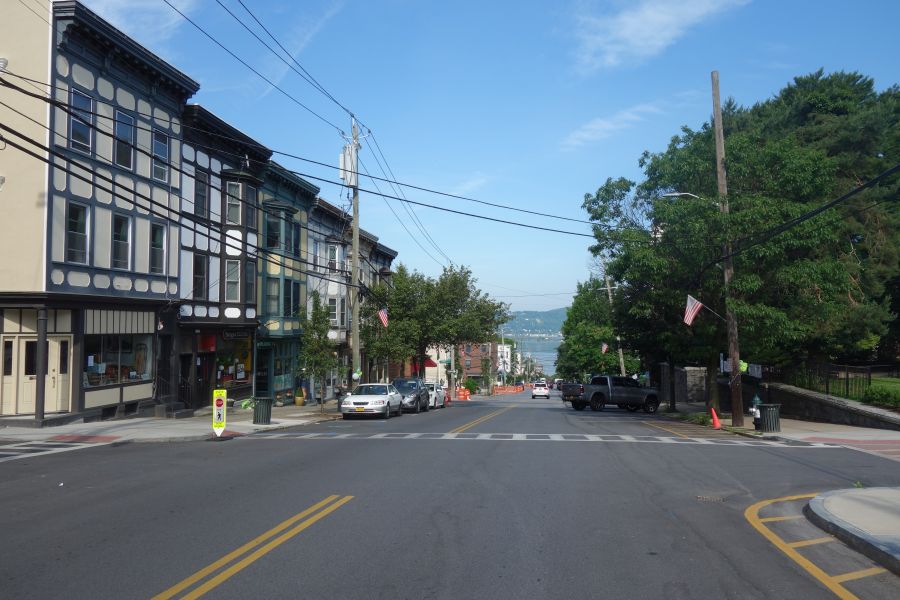 The OCA Trail goes directly through a number of downtown areas. So you are never far from services or train stations.

If you want to start your ride at the south end, a good place to start is at Glenwood Avenue, particularly if you are taking the train. This trail access point is very close to the Glenwood train station, but beware, you will have to go up a big hill to get to the trail.

Heading north the trail is continuous, but you will need to pay attention to your map or to signs (where available) to get you through tricky spots where the route gets confusing. In most downtown places the trail is shared with roadways or parking lots. Try your best to follow along. In some cases, it may even feel as if you are riding through somebody’s front or back yard.  It’s OK – you are still on the trail.

Hey, am I riding through someones yard? Yes you are…but it’s also the trail!

As you approach Tarrytown you will pass by some beautiful properties including Lyndhurst Castle. These were once Hudson River estates for the wealthy. Lyndhurst, in particular, offers tours. However, once you pass Lyndhurst, you will get to your first major interruption in the trail, since it is here that the aqueduct was obliterated by the construction of I-287 and the Tappan Zee Bridge. So you will have to ride along Route 9 for a while until you get to downtown Tarrytown where the OCA trail picks up again. This is a busy road, so it isn’t the greatest for cycling. But you could always ride on the sidewalk if you did not feel safe. It is here that you will also pass the entrance for the Mario M. Cuomo Bridge bike path.

The OCA trail goes past many remnants of the aqueducts infrastructure, such as this weir building.

If you want to ride north of Tarrytown, the OCA trail offers some nice interrupted stretches. But there are also major gaps in the trail that you will need to get around. Once again, having a map will really help you figure this out. The biggest obstacles are Sleepy Hollow High School (which was built right over the aqueduct), a missing piece of trail in Scarborough, and passing through downtown Ossining, where you will need to use local streets (and stairs) to follow along the path. The last major interruption in the trail is where Route 9A was constructed across the aqueduct (another highway obliteration…). Here you will need to skirt around the fence of a training and conference center owned by GE, so again you will need to pay attention to signs (and your map). But the last couple of miles are spectacular, as you move away from the Hudson River into the Croton River gorge. The trail ends at the Croton Dam, which is a site to behold.  You can bike across the top of the dam, or go down to the gorge below, which is a County park.  If you are taking the train back, just reverse your course back a few miles and you can access the Croton-Harmon Metro-North station relatively easily.