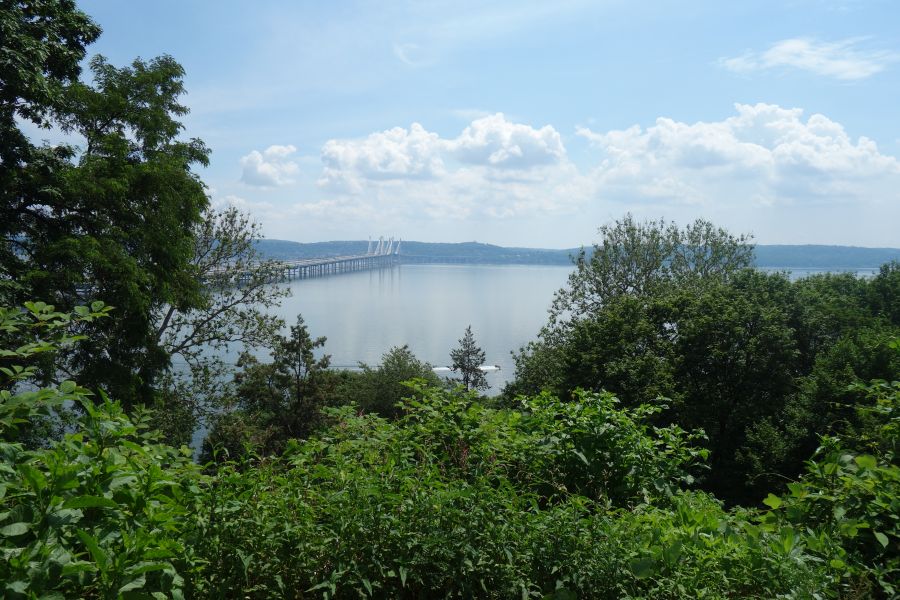 A view of the Mario Cuomo Bridge from the Esposito Trail.

If you are planning to ride across the new Tappan Zee Bridge (or Mario M. Cuomo Bridge) bike path, you are probably wondering “what other trails connect to this bike path”?  Well, look no further than the Raymond G. Esposito Memorial Trail. The Esposito Trail is a great way to connect from the bridge to the Villages of Nyack, South Nyack and Piermont.  This trail will also connect you to the Joseph B. Clarke Rail Trail in Sparkill via its extension called the Old Erie Path 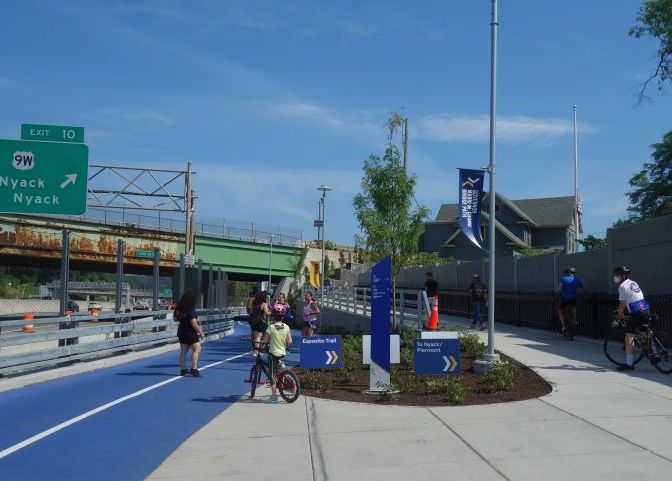 Clear signage takes you from the Tappan Zee Bridge bike path to the Esposito Trail.

The new Tappan Zee Bridge bike path is a great new amenity for cyclists in the Hudson Valley.  The Esposito trail connects almost seamlessly with the bridge bike path to take you directly to South Nyack and Nyack where there are plenty of stores, restaurants, and services.  These bike-friendly villages are a great place to head to after riding over the Mario M. Cuomo Bridge. 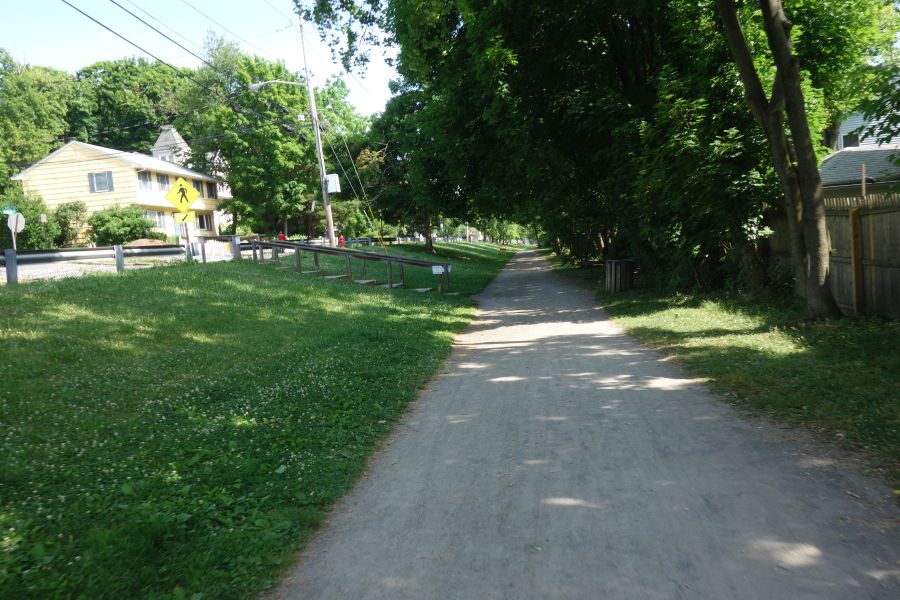 The Esposito Trail is wide and easy to ride in between the bridge and Nyack.

You can also head south on the Esposito Trail, which eventually becomes the Old Erie Path. This trail follows the alignment of the former Northern Railroad of New Jersey, which once ran passenger trains between Jersey City and Nyack. Passenger service ended in 1966, and today it’s another great rail trail for cyclists.  The surface is a combination of dirt and gravel, so make sure you ride this with either a hybrid bike or a mountain bike.  Sturdier road bikes should also do okay. 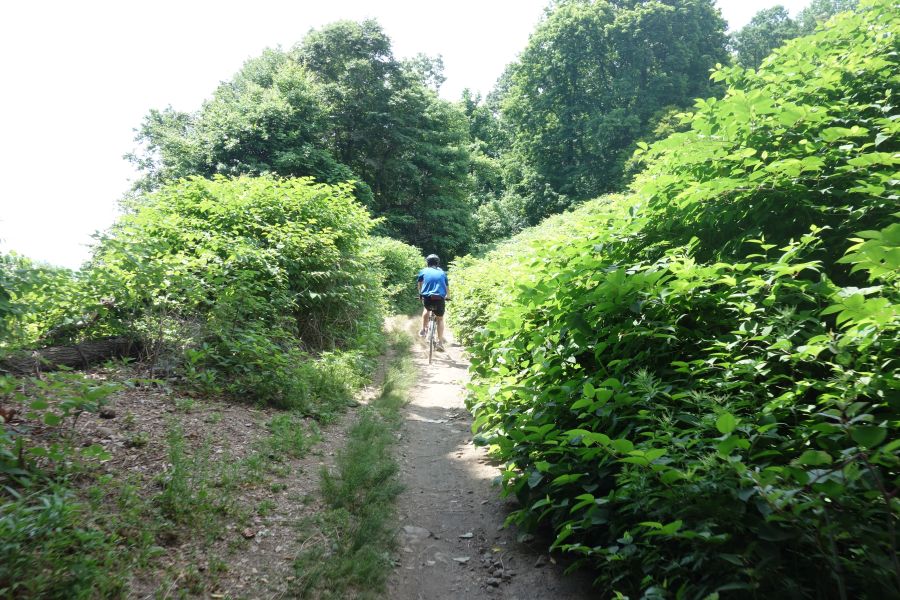 Watch out for narrow sections like this one. One way only!

While the trail is generally wide and smooth north of the bridge, as you move south, it gets bumpier and narrow.  There are a couple of spots where the trail becomes very narrow and it’s one-way at time, so be aware of people coming in the opposite direction! 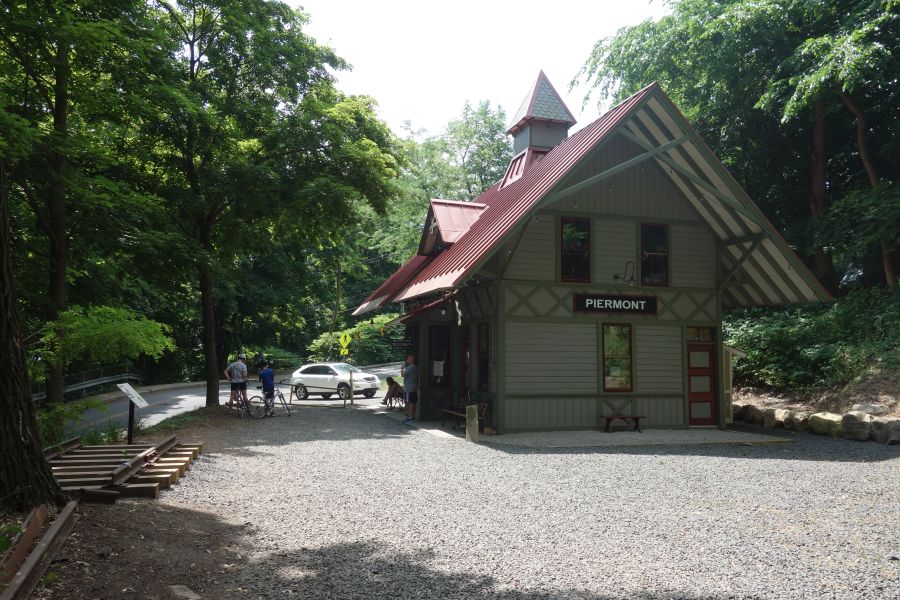 When you reach Piermont you will see a beautifully restored station. Keep riding south and you will eventually get to the hamlet of Sparkill where you can easily pick up NYS Bike Route 9 which takes you to the George Washington Bridge. Sparkill once had a major junction of railroads in its center….which is now a major junction of bike paths.  From here, you can get on the Joseph B. Clarke Rail Trail and ride further.  Or you can stop and get lunch here at one of several restaurants. With the connection to Bike Route 9, the Esposito Trail can be a great part of a circular route that features the Old Croton Aqueduct, the Mario M. Cuomo Bridge and Bike Route 9 back to Manhattan via the George Washington Bridge.