You are here: Home1 / Catskills 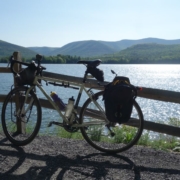 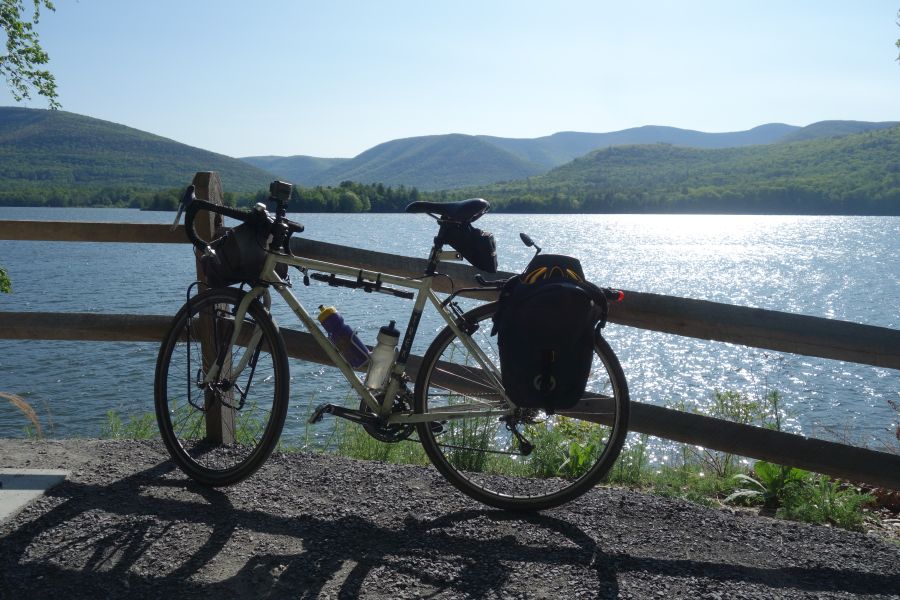 If you are looking for one of the most glorious 10- to 20-mile bike rides you can do in the Hudson Valley, look no further than the Ashokan Rail Trail.  This trail was recently opened in the fall of 2019 and is one of the region’s newest and best constructed trail facilities. While the trail is unpaved, the surface is a smooth crushed stone that is suitable for most bikes. The trail is also very wide, ranging from 10 to 12 feet in width, which is a lot wider than most bike paths in our region. The result is a beautiful trail experience that feels uncrowded. It’s also a great trail to do over a weekend, for example, by combining it with the Catskill Scenic Trail. 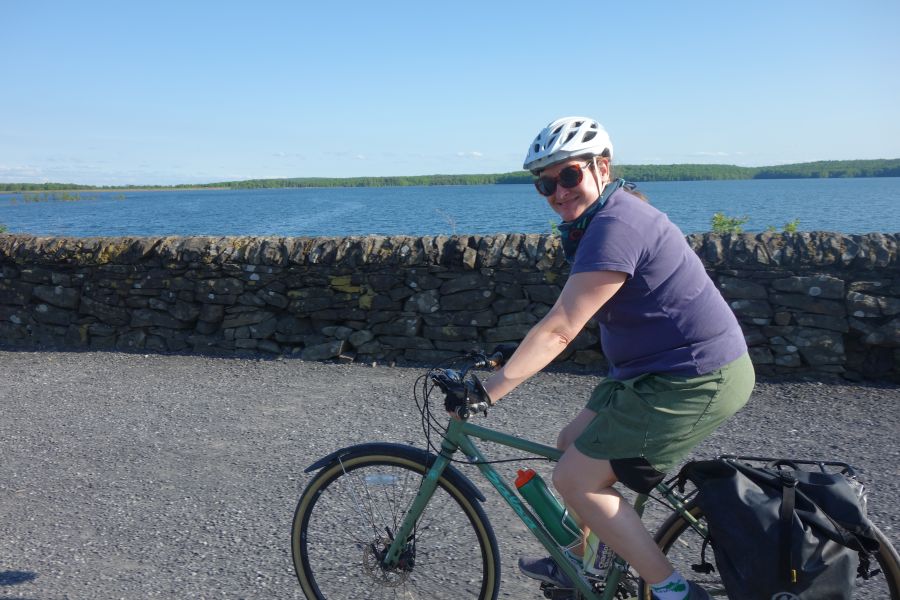 Perhaps the best part of the Ashokan Rail Trail is its views of the Ashokan Reservoir. The Ashokan is one of the largest reservoirs in the NYC water supply system. However, access to the water is very limited, with only a few roads and pathways going up to the water’s edge. This trail has several stunning viewpoints of the reservoir, often with the Catskill Mountains in the background. There are many places to stop and enjoy the view. In between the lakeside viewpoints, the trail is mostly shaded by surrounding woods. This makes the Ashokan Rail Trail a nice place to ride in summer.  And of course in autumn, the trail is an explosion of fall color! 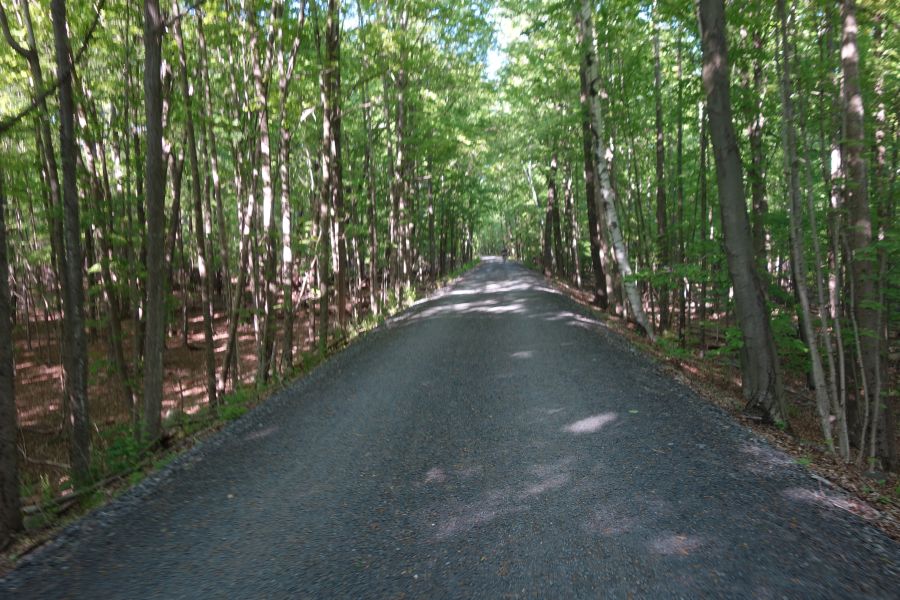 The Ashokan Rail Trail is 10-12 feet wide and paved with crushed stone. Many sections are wooded, offering shade and lots of color in autumn.

The Ashokan Rail Trail has a very good website that explains all aspects of the trail along with providing a map of the trail.  The map is very useful in guiding you towards the three parking lots along the trail, which runs east to west.  The Boiceville Bridge Trailhead parking is at the west end while the Woodstock Dike Trailhead is at the east end. Both trailheads have scenic viewpoints near them and all parking lots have portable toilets. A third parking lot is located in the center of the trail in Shokan. When you park, be aware that some of the spaces in the lot are reserved for anglers. Many of the creeks which feed the Ashokan Reservoir, including the Esopus Creek,  have excellent fishing. All parking lots have excellent signage directing you to them from NYS Route 28, which is the main corridor route through this part of the Catskills, connecting Kingston to Belleayre. 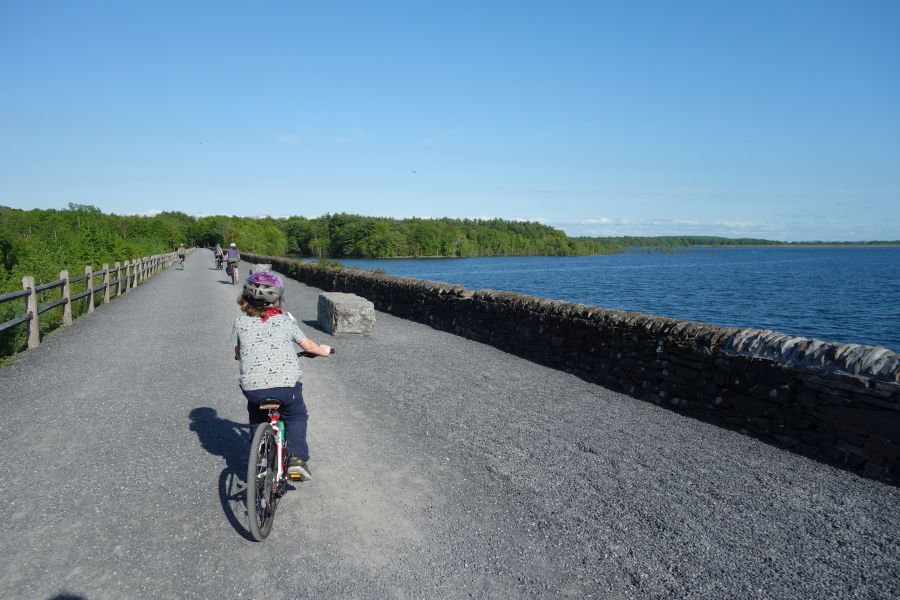 Riding across the Glenford Dike offers great views of the Ashokan reservoir.

Despite its rural location, the Ashokan Rail Trail is also served by public transit, since the trail follows the general alignment of Route 28. Ulster County Area Transit Route Z provides this service, and the bus has bike racks for you to use. In addition, you can also take Pine Hill/Adirondack Trailways buses to this trail on any route that travels down Route 28. However, you would need to put your bicycle in some kind of box to do this.

If you aren’t lured to the Ashokan Rail Trail simply for its magnificent views or great riding conditions, the fascinating history of this area is another reason to visit. The trail is built on top of the rail alignment for the Ulster and Delaware Railroad. This railroad, which initially began construction in the 1820’s with the intention of connecting the Delaware and Hudson Canal in Kingston with Oswego along Lake Ontario, was ultimately scaled back to travel between Kingston and Oneonta. As the only railroad that went entirely through the Catskills, the Ulster and Delaware played a crucial role in transporting agricultural products, timber, bluestone and coal.  It also offered robust passenger service for tourists vacationing in the Catskill Mountains. While the final train ran in 1976, there are still portions of the line that are used by scenic railroads, such as the Catskill Mountain Railroad which operates in Kingston, and the Delaware & Ulster Railroad which operates in Arkville. The Trolley Museum of New York also maintains and operates trains on the easternmost portion of the line along the Kingston waterfront.  In between where these railroads operate, there are sections of the railroad that have been converted into bike paths, such as the Ashokan Rail Trail, the Catskill Scenic Trail and the Kingston Greenline.  The Catskill Rail Explorers also offers unique pedal-powered rail cars on a section of track as well.  Along most of the line you can still see many railroad artifacts as well as some station buildings which have either been abandoned or repurposed, such as the Empire State Railway Museum. 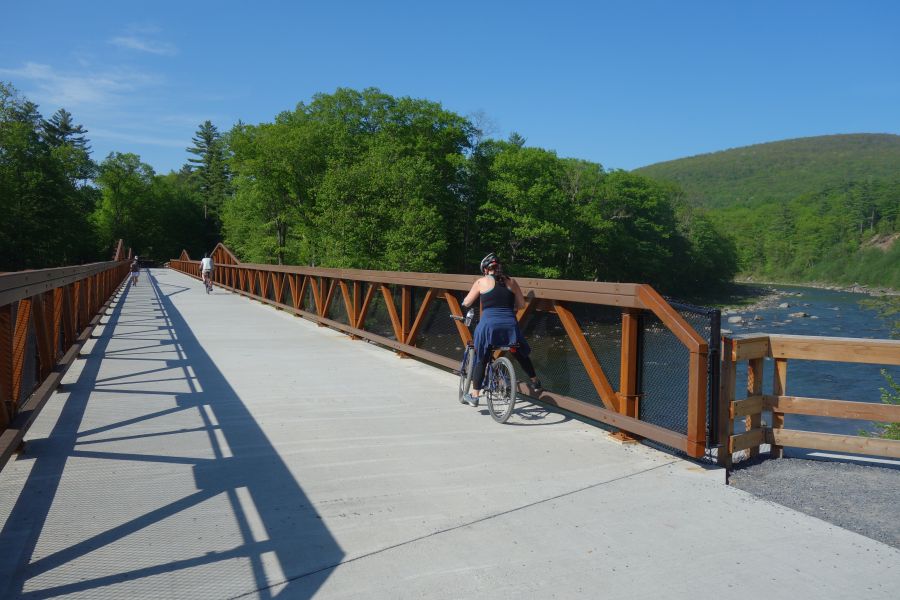 The Boiceville Trestle crosses the Esopus Creek and was reconstructed to accommodate the trail.

In addition to railroad history, the Ashokan Rail Trail also offers insight into the history and construction of the Ashokan Reservoir, which was constructed between 1907 and 1915, and displaced twelve communities containing 2,000 residents. While some of these communities were relocated to upland locations, you can still see the foundations of some of the buildings from the original communities in the reservoir when the water levels are low.

The Ashokan Rail Trail has several interpretive panels along the length of the trail that tells the history of both the railroad, the reservoir and the surrounding area.  You can view the panels before you make your trip on the website. 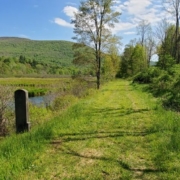 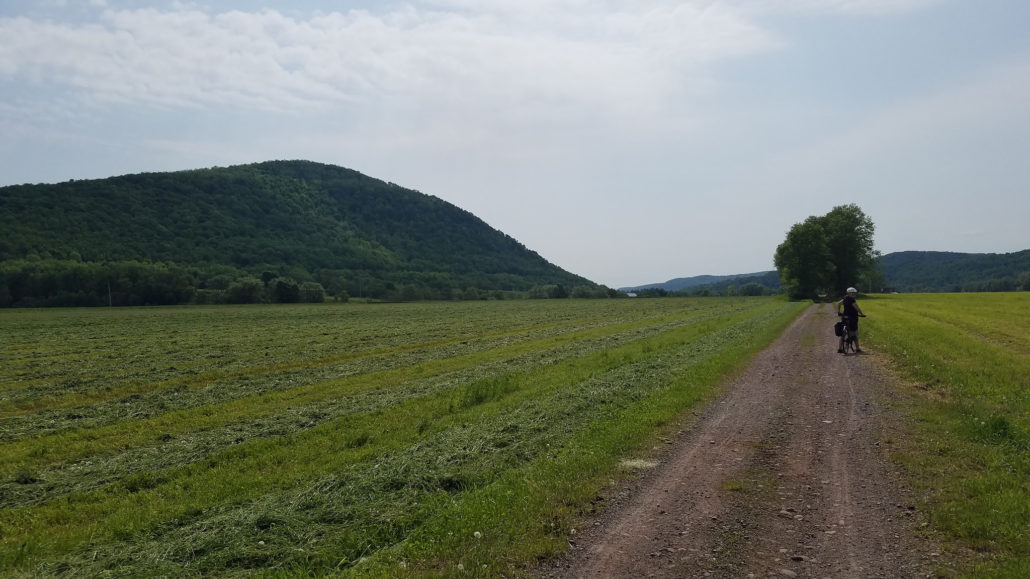 The Catskill Scenic Trial is one of the most beautiful rail-trail bike paths anywhere near the New York Metropolitan Area. Framed by both mountains and farms, this 26-mile, car-free ride is a perfect outing for a day or a weekend. But the beauty of this trail is thanks to it’s out-of-the-way location that takes you along the headwaters of the Delaware River. Trail conditions are also somewhat rugged if you are used to riding on paved surfaces. But we believe this ride is so nice that it’s worth the effort. To see the most of this trail, it’s best to be able to ride it one way using a car shuttle. Gotham Bicycle Tours will be offering car shuttle services in 2020 on certain weekends.

Getting to the trail. 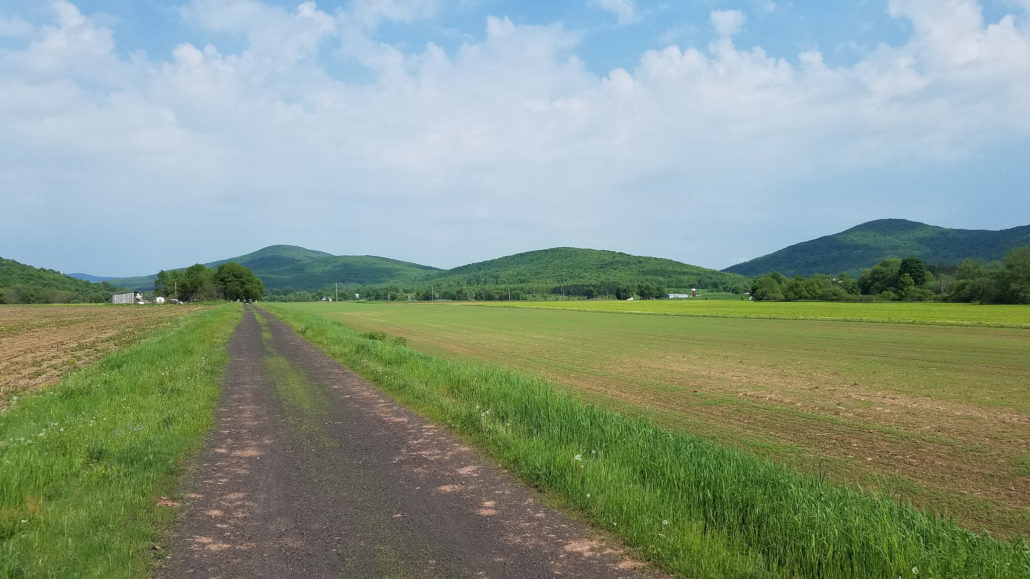 One of the many wide open spaces the Catskill Scenic Trail will take you through.

The Catskill Scenic Trail is located in the northwestern portion of the Catskills, mostly in Delaware County, but also within a portion of Schoharie County. It’s about a 3 or 4 hour drive to get to the trail from New York City, depending on the route you take and the traffic.  The trail is not served by public transportation, so you must drive to the trail or find a ride.  But once you are there, you’ll quickly find out that it was worth the effort to get there.

A good place to start for planning your ride is to think about where you will park. The Catskill Scenic Trail website has a great map of the trail that shows the communities that the trail passes through, as well as where to park. The trail generally runs east-west in a upside-down U shape, and trail conditions are generally better for riding at the western end. There is a formal parking lot at the western end in Bloomville as well as trailside parking in Stamford. Hobart, located in between, also has some municipal parking lots near the trail. In addition, there are also less formal dirt lots near where the trail crosses roads. Wherever you park, keep in mind that you will need to ride out on the trail, and then turn around to come back, to get back to your car. Doing the ride one-way with a car shuttle allows for more flexibility, particularly if you are interested in doing the more difficult sections at the eastern end of the trail.

Most of the old railroad mile markers are still standing along the Catskill Scenic Trail, indicating the number of miles to Kingston.

This trail used to be part of the Delaware and Ulster Railroad, which once chugged into the Catskill Mountains between Kingston and Oneonta. The last train ran in 1976. Since that time the 26 miles between Roxbury and Bloomville has been transformed into a bike path.  And the section between Roxbury and Arkville now operates as a scenic railroad. Most of the trail still has the old mile markers from the railroad’s days of operation, with distances shown to Kingston. The railroad generally made use of the flat terrain along along both the the West Branch and East Branch of the upper Delaware River, and the trail takes you near the headwaters of both branches, hundreds of miles away from where the river empties into Delaware Bay. 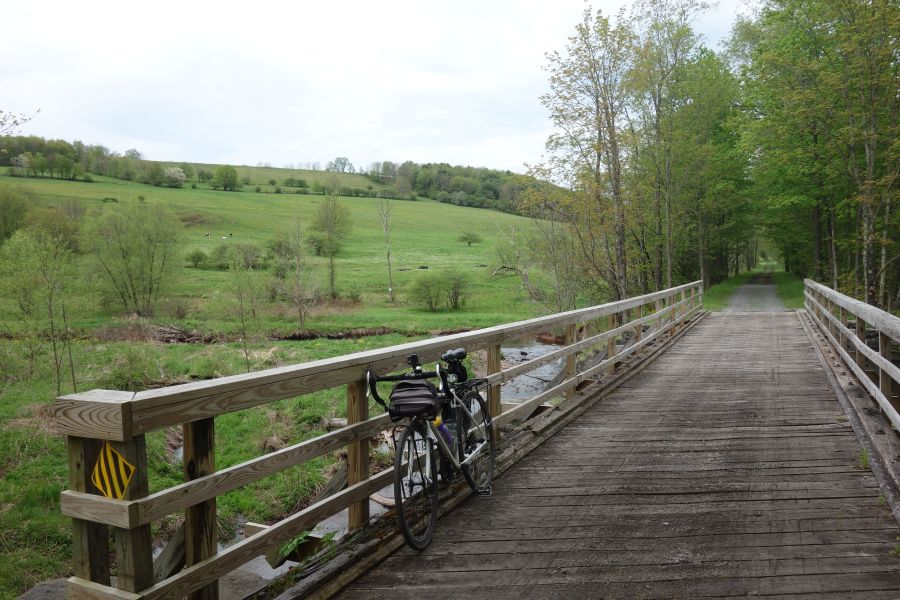 A quiet bridge that crosses the meandering West Branch of the Delaware River.

The experience this trail offers is rugged and remote, although the trail is generally flat. The western portion of the trail, that runs along the West Branch Delaware River generally between Bloomville and Stamford, has the best conditions. But you should be aware that the trail conditions change back and forth between gravel, dirt, stone dust and grass. Depending on the season, the grass can be tall, so you will want to bring bug spray to spray your legs to protect against ticks and mosquitoes.

One of the rougher sections of trail to ride.

In Stamford you reach the headwaters of the West Branch Delaware River and you begin to transition over to the East Branch. This transition area is one of the tougher parts of the ride, particularly the portion between Route 23 and Route 30 near Grand Gorge. This part of the trail is the only part that does not go along a waterway and the trail conditions are rocky and muddy, thanks to poor drainage. Take your time here and walk your bike if you need to. 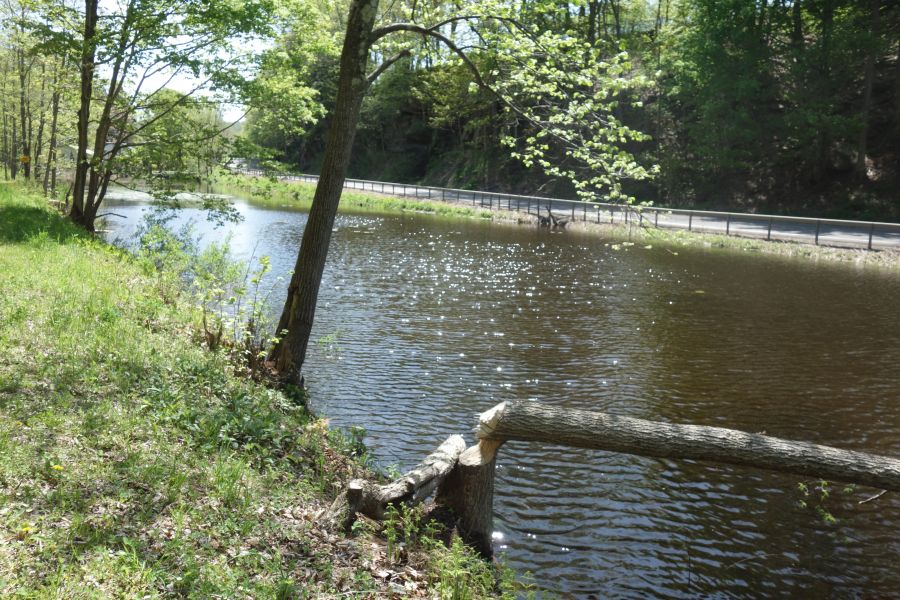 Keep on the lookout for beavers as you ride along the East Branch of the Delaware River.

Once the trail crosses Route 30, you will now be along the East Branch Delaware River whose source is a small pond behind a large pile of tires. The riding gets easier again here, although it still can be rugged thanks to the beavers who live here. It is not uncommon to find beaver dams that cause flooding along the trail. So be ready to ride through sponge-like grass and mud depending on the current construction projects these beavers may be undertaking. Also, the grass back here can be very high depending on the season, so bring bug spray so you can enjoy the beautiful views without getting bit by ticks and mosquitoes.

Uh oh, some beavers built a dam creating a lake across the trail. Time to make a detour!

Given the remoteness of this trail you should also carefully plan your day based around the services you can obtain along the trail, in addition to the parking lots discussed above. 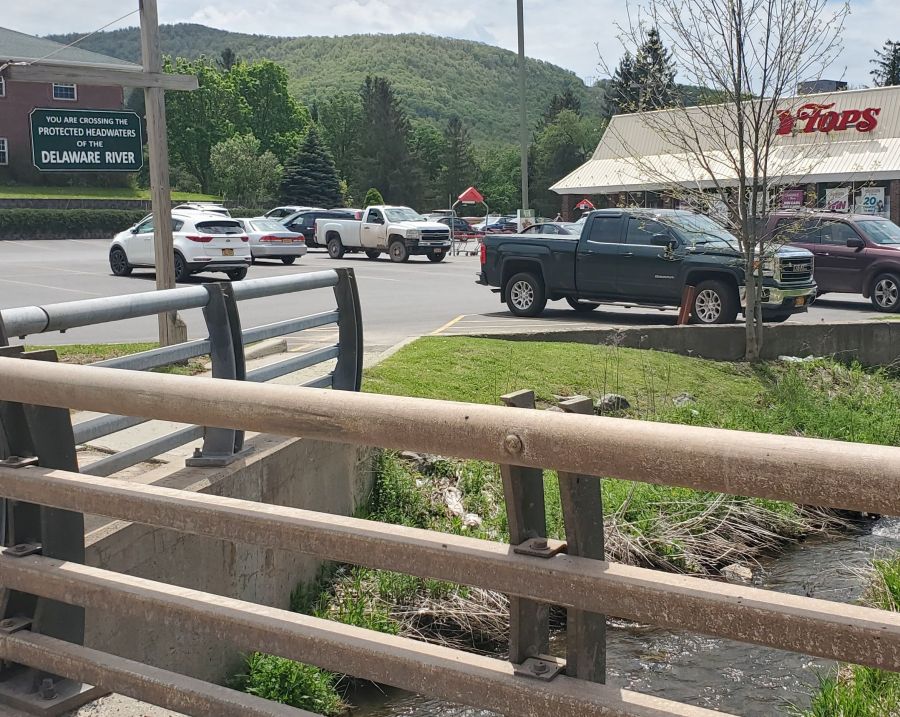 The Headwaters of the Delaware River are located right behind this supermarket in Stamford.

The largest commercial area along the trail is in Stamford, although you will need to ride a few blocks away from the trail to find the supermarket, a convenience store and an ice cream stand.  Services can also be found in Hobart, where the Village has placed a map showing where services are located along the trail. Roxbury and Grand Gorge have services, but they are a further ride from the trail (with the exception of Sundaes Restaurant and Tasty Freeze, just to the west of Grand Gorge).  There are no formal restrooms or portable toilets along the trail, but you can usually find restrooms at businesses located in these areas.  Please note that because these communities are very small, some businesses may not be open every day.  So call ahead before you start riding.  You don’t want to arrive at a restaurant hungry, only to find that it is closed that day!