You are here: Home1 / Breweries

A favorite pastime for many cyclists is to do a big ride that ends at a craft brewery destination. There’s nothing better than enjoying a beer at the end of a big ride!  But getting back on that bike after drinking that beer can be tough going…or even dangerous if you’ve had a few too many.  Unless the brewery you’ve ridden to is next to a train station, or you’ve made plans to have someone pick you up, riding those final miles after your brewery ride can be a challenge. 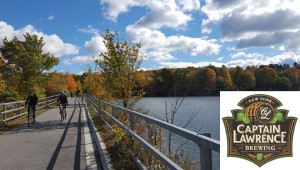 That’s why we came up with our Captain Lawrence Bicycle Tour. Captain Lawrence is a locally famous brewery…you can find their beers in many stores and restaurants throughout the tri-state region. And to ride to Captain Lawrence is relatively easy….its about a half-mile away from a great rail-trail.  But because rail-trails are in the locations where trains used to be….unfortunately there’s no easy way to get home with your bike if you don’t want to do any more riding.  And that’s the situation we were hoping to remedy with our bike tour.

Captain Lawrence is a great brewery to experience, and given its proximity to New York City, it should be easy ride for anyone from the city to do…and now it is!  Check out our ride details on our website!  With lunch, rail-fare and a ride back to the train included…it’s an unbeatable value for an all-inclusive day trip from the city!