One of the most spectacular bike paths in the New York Metro Region is the Ocean Parkway Coastal Greenway (or Jones Beach Bike Path) on Long Island which traverses almost the entire length of Jones Beach Island. A major segment of this path was opened this year, and it’s now a continuous 20-mile path between Cedar Creek County Park in Wantagh and Captree State Park in Babylon. This bike path has it all: waterfront views, convenient restrooms and parking areas, beach access, restaurants and the chance to spot wildlife.  But it can also be a challenging ride because of wind, bugs and the remoteness of certain areas. So you need to come prepared! Read on to find out more!

If you do the entire 20-mile ride, you will actually be riding on a series of bike paths with different names that go along the highways that Robert Moses constructed to provide access to Jones Beach State Park as well as Captree State Park and Robert Moses State Park. The western portion of this trail system is the Ellen Ferrant Memorial Bicycle Path which runs in a north-south direction along the Wantagh State Parkway between Cedar Creek County Park and Jones Beach State Park for about 5 miles. Once you arrive at Jones Beach, the trail turns east and you are riding on an older section of the Ocean Parkway Coastal Greenway which goes between Jones Beach State Park and Tobay Beach, which is Town beach run by the Town of Oyster Bay. East of Tobay Beach is the newest segment of the trail, which is about 10 miles long and passes through Gilgo Beach before reaching Captree State Park where the trail ends.

Captree State Park is a beautiful spot. You can enjoy a view of the Robert Moses Causeway from a picnic area, but you cannot ride a bike over it. The bike path ends (or starts) here with no bikeable connections to other roadways.

While the entire bike path system is about 20 miles, any ride you do on this trailway will need to be “out-and-back” unless you have someone picking you up at one of the parking areas along the trail. So to ride the whole path, you will actually need to ride 40 miles if you are parking at one of the trail’s endpoints at either Cedar Creek County Park or Captree State Park because it’s one-way out and one-way back.  There is no way to do this trail as a loop.  While the Ellen Ferrant Memorial Bicycle Path will get you across the bay on the west end of the path, you would need to ride your bike on the Robert Moses Causeway on the east end of the path to close the loop, and bikes are not allowed on that road.  So unfortunately, when the bike path reaches Captree State Park, the trail is a “dead-end” and you have to go back. Or you could make Captree State Park your starting point and ride west before turning around. 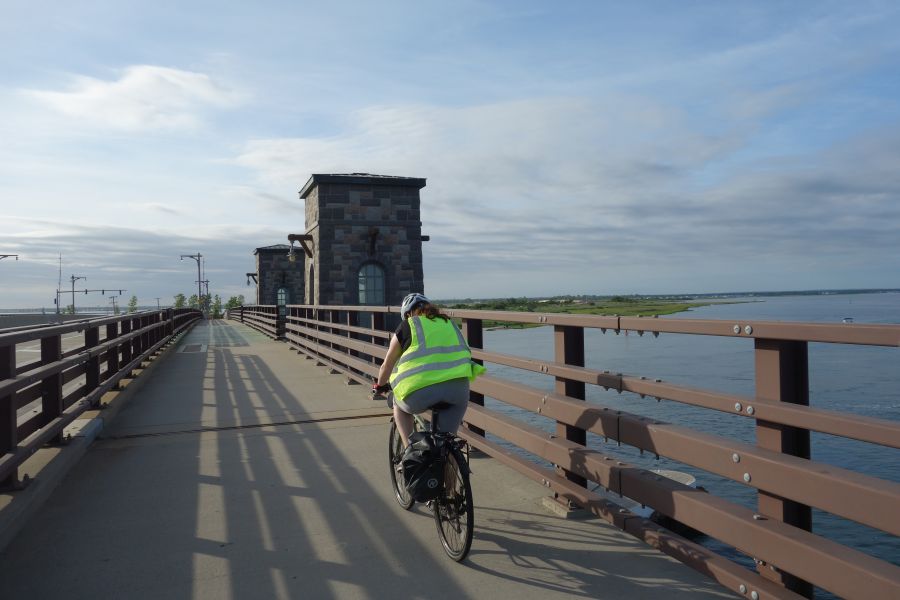 The Ellen Ferrant Memorial Bikeway crosses the bay on a series of bridges with beautiful views.

If you want to take public transit to the Jones Beach bike path you can do that too. The Wantagh station for Long Island Railroad is a short distance away from Cedar Creek County Park and its easy to hop on the bike path from there. However, whatever distance you ride in the eastern direction, you’ll need to turn around to get back.

If you are driving to the bike path in a car, you have several choices of where to park, based on how much you want to ride.  The only place where you can park for free is Cedar Creek County Park. If you park at either Jones Beach State Park or Captree State Park, you will need to pay the parking fees associated with those State parks, which is usually around $8-10 unless you have an Empire Pass.  It is also possible to park in the middle of Jones Beach Island at either Tobay Beach, Gilgo Beach or Cedar Beach. However, these beaches are Town-controlled and have higher parking fees (unless you are a Town resident).  For example, parking at Gilgo Beach costs $40 on a Friday, Saturday, Sunday or holiday and $20 on all other days. Residents of the Town of Babylon can park for free.  You can also park for free if you arrive later in the day after the payment booth is closed. Parking is also free off-season, but check with the Town before you go to make sure they are not charging. 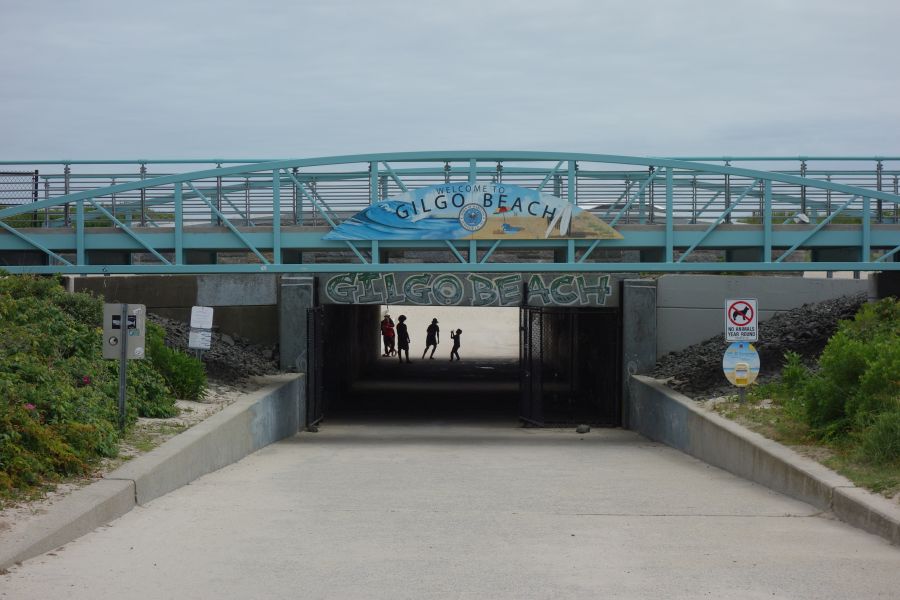 Go for a swim at one of the many public beaches you will pass. Each beach has bike parking, restroom access and a food concession.

No matter where you ride along the Jones Beach bike path, it is a great experience.  You are right along the water for the entire time with great views of the bay between Jones Beach Island and the main part of Long Island.  As we mentioned earlier, the trail goes through a number of areas with services and beach access, and helpful signage along the trail informs you about what services are available in which places. There are restrooms and places to eat at Jones Beach, Tobay Beach, Gilgo Beach and Cedar Beach.  You can also lock up your bike at any of these locations and go for a swim on the ocean side of the island by using underpasses that go underneath Ocean Parkway.  If you are arriving by bicycle you won’t have to pay the beach access fees. 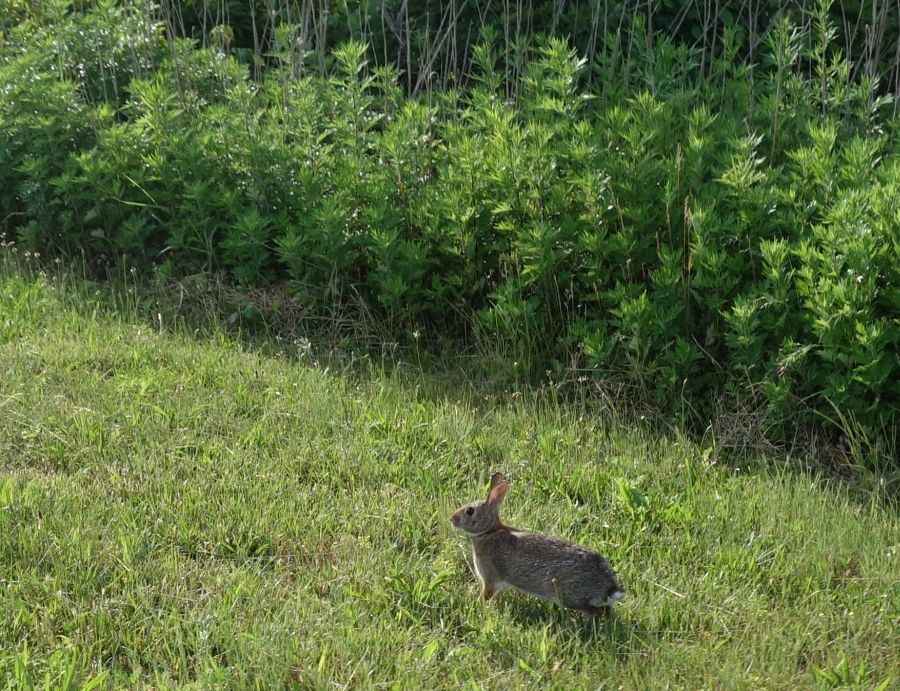 We saw scores of baby bunnies along the trail. But be warned….when we stopped to take this picture, we were almost eaten alive by biting flies!

Wildlife also abounds along the pathway. On the day we were riding there, we saw scores of rabbits along the trail popping in and out of the brush. Unfortunately insects are also a major force in this area as well, so depending on the day, you will want to have bug spray available. For example, just stopping to take a picture of a bunny can invite a swarm of biting flies that will leave welt-like bikes all over any exposed skin. So in these areas you will need to keep moving so that the flies cannot land on you.  Or bring bug spray.

Wind is also a major consideration to think about when doing this ride.  Since Jones Beach Island is a barrier island, it can receive a lot of wind. So depending on the day, and the fact that the trail requires you to ride “out-and-back”, you will likely have the wind at your back in one direction….and the wind in your face in the other.  So definitely think this through before you start riding! 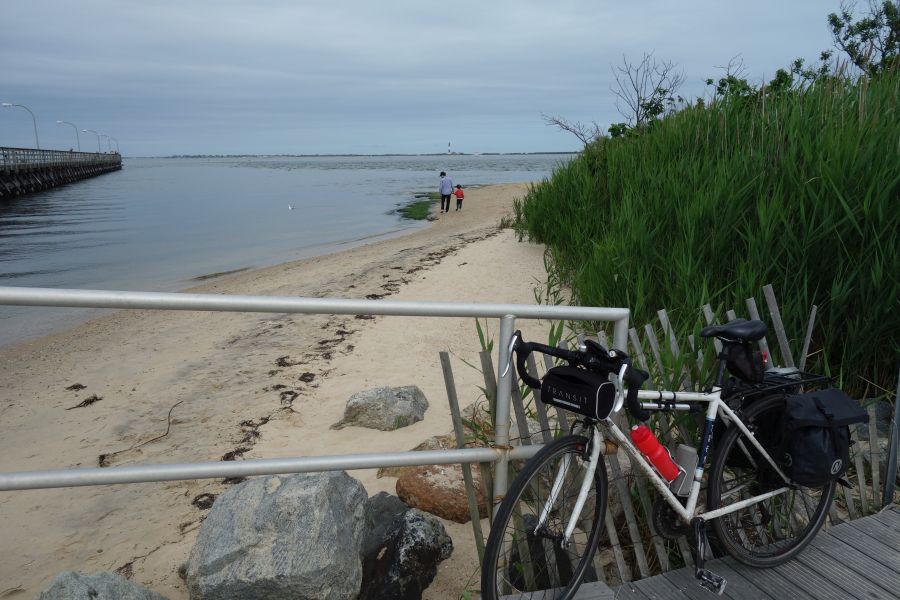 Captree State Park is a great ending for this bike path. You can walk along the shore and see the Fire Island Lighthouse off in the distance.

Also keep in mind that while there are services are available at the different beaches along the route, there is nothing in between those hubs along the bike path but open road. So make sure you know the distances between the various amenities before you set out on your ride.