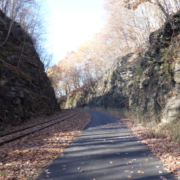 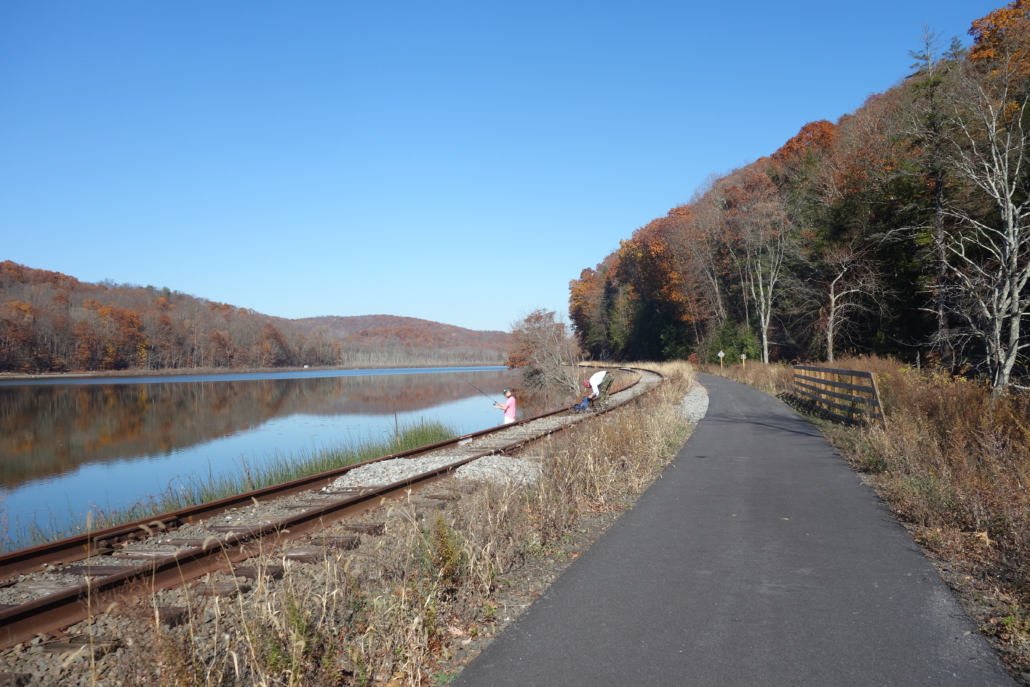 The Maybrook Trailway is the newest rail trail in the lower Hudson Valley and it is also the very eagerly-awaited “missing link” of trail between the former Putnam Division Railroad trailway system (also known as the Putnam Trailway, North County Trailway, South County Trailway and Putnam Greenway depending on where you are) and the trail system centered around the Walkway-Over-the-Hudson (which is comprised of the walkway itself, the Dutchess Rail Trail, the Hudson Valley Rail Trail and the Wallkill Valley Rail Trail). With the construction of the Maybrook Trail, it is now possible to ride continuously on a bike path (with no cars) between New York City and Kingston – almost 100 miles! All of this is part of the new Empire State Trail which goes across the entire state (although not all of the Empire State Trail is bike paths). 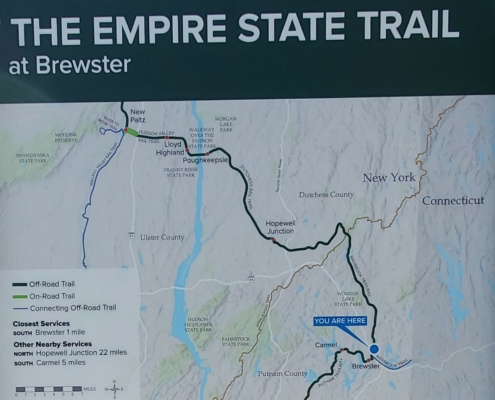 The Maybrook Trailway travels between Brewster and Hopewell Junction for 24 miles. There are no services available or restrooms.

The Maybrook Trailway has been a long time coming. Instead of being a “rail trail’ the Maybrook is actually a “rail with trail” traveling alongside the Maybrook Branch owned by Metro-North Railroad. The trailway itself is also owned by Metro-North, which makes it one of the only bike paths to our knowledge to be owned and operated by a commuter railroad. The uniqueness of this arrangement also makes for a very unique trail experience, as you travel through very remote areas that are only accessible by this rail line. Far from development and traffic, the Maybrook Trail offers a quiet experience with the sounds of birds and wildlife as a soothing soundtrack in the background. In fact, the Maybrook Trailway is probably one of the most scenic bike paths in our entire region.

Wide open and quiet, with only the sounds of nature surrounding you.

The Maybrook was a mountain railroad, crossing the Appalachian Trail.

However, this sense of solace comes at the expense of convenient services. There are no easily accessible services anywhere along the trail and there are no restrooms along its entire 24 mile length. So you need to go into this ride prepared, or you could consider one of our tour packages where we provide rest stops and services to our riders. There are also no places to sit along this trail except for the stone boulders placed near road crossings. This is a shame since there are so many pretty views that would be nice to sit and enjoy.

As you would expect from a transit agency, the Maybrook Trailway has lots of clear signage. Most of this involves telling you what you can’t do: don’t go on the tracks, stay off of private property, don’t swim in this lake, etc. But there are also lots of great informational panels telling 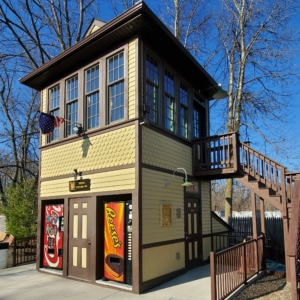 Although there are no services or restrooms along the Maybrook Trail, when you reach the end in Hopewell Junction, there are restrooms and vending machines.

you about railroad history and the many settlements that you pass.  Also, because the Maybrook Trailway goes along train tracks that connect to the Brewster rail yards, you can easily take Metro-North railroad from NYC with your bike to get to the trail. It’s also possible to ride the 44 miles to Poughkeepsie (via the Dutchess Rail Trail) and then take the train back to the city via the Hudson Line while you watch the sun set over the Hudson River. Discount rail fare is available for this excursion with our tour package.