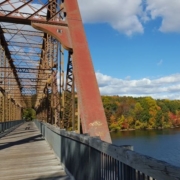 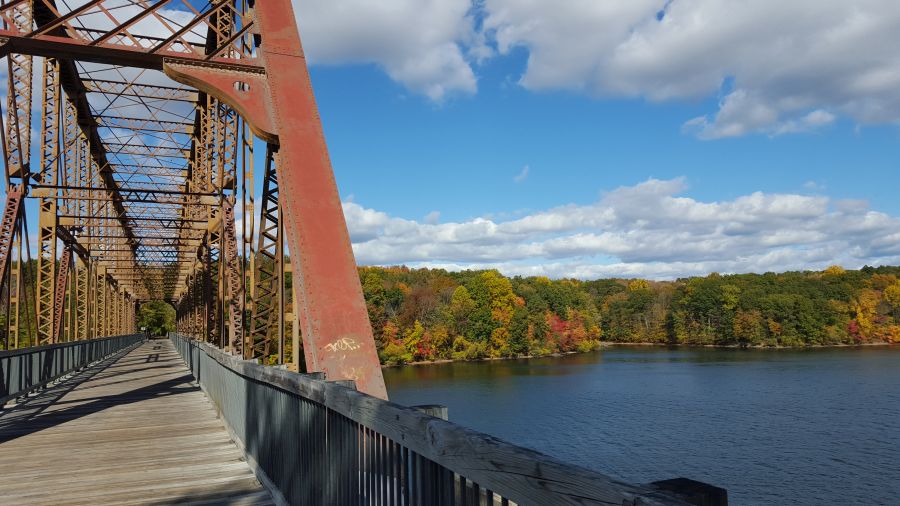 If there is one bike path that most closely resembles a trunk-line, main artery for bikes in the Hudson Valley region, it is the South and North County Trailway in Westchester County.  This trail, which runs continuously from Bronx/Yonkers border for almost 50 miles to the Village of Brewster in Putnam County, is the centerpiece of Westchester’s trail network and one of the most popular parks in this part of the region. It also features prominently in our Hudson Valley Craft Brewery Bike Tour, which is our most popular tour.

Although this trailway is typically viewed as one long bike path, it is technically made up of four separate trailways with different names (and different maps). The South County Trailway runs between Van Cortlandt Park at the Bronx/Yonkers border to Old Saw Mill River Road, which is the border between the Towns of Greenburgh and Mount Pleasant.  North of Old Saw Mill River Road, the path is the North County Trailway until you get to the border between Putnam and Westchester Counties where the path becomes the Putnam Trailway. The southernmost segment of the trail, which goes through Van Cortlandt Park in the Bronx, is named the Putnam Greenway. 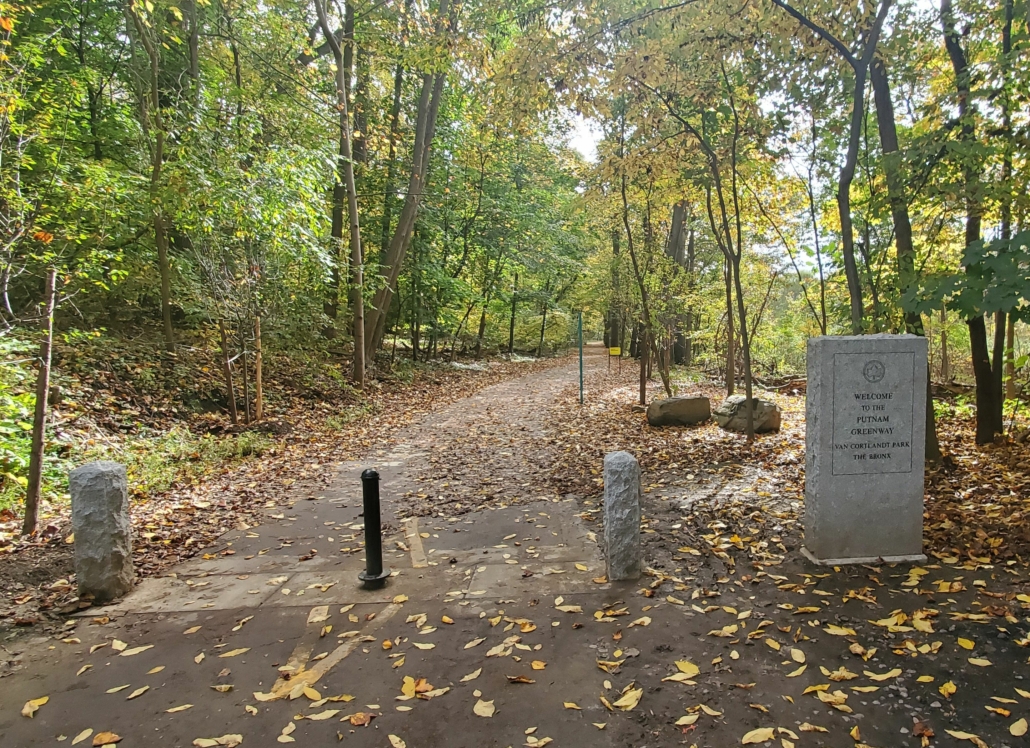 A stone marker lets you know you are crossing into New York City on the Putnam Greenway.

Although the name changes four times, and you need four different maps for it, the trailway is basically the same throughout. This was once a train line, known as the Putnam Division of the New York Central Railroad.  It was first constructed as the New York City & Northern Railroad in 1881 when mining operations were abundant in Putnam County. Passenger service continued until 1958, but it was never as successful as the Harlem or Hudson lines (both of which continue as Metro-North train lines today) probably because riders needed to transfer in the Bronx to continue their trips to Manhattan. After passenger service ended, freight service continued until 1982 at which point the right-of-way was transferred to the New York State Department of Transportation. Then Westchester County and Putnam County both constructed trailways on the alignment as county parks. The New York City portion of the right-of-way remained a dirt path until it was finally paved in 2020. 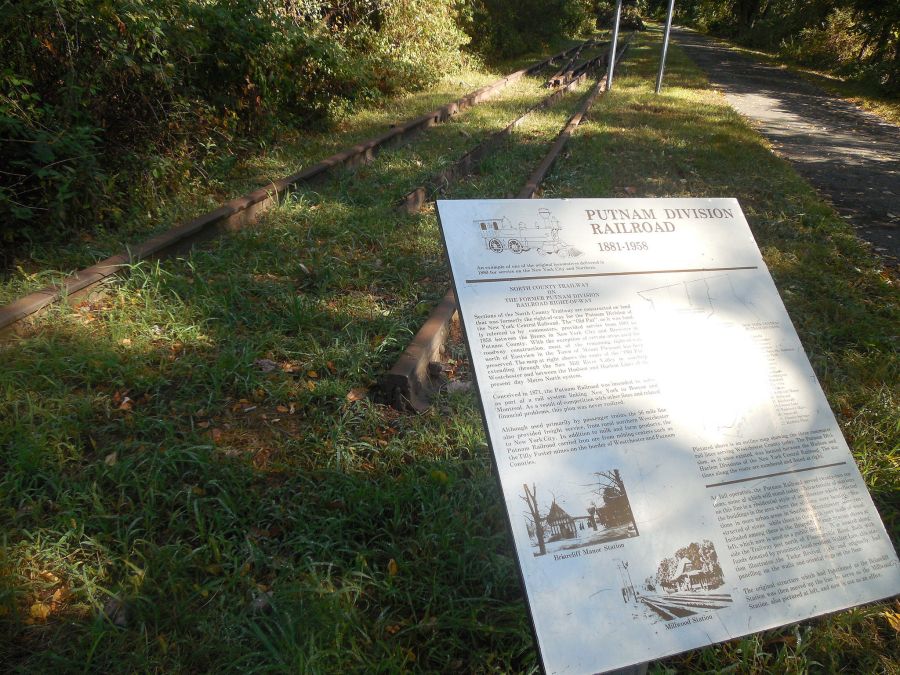 Historic panels along the trailway tell you about long lost train stations.

This trailway corridor has been constructed piece-meal over several decades. The first segments were constructed by Westchester County in the 1990’s. The last piece was opened in 2017. What this now means is that there are sections that are relatively new, and in great shape….and there area also old sections that are in very rough shape.  The conditions can change dramatically as you ride.  The good news is that some of the older sections are now being reconstructed and are better than ever. The bad news is that this construction will take many years to reach all of the spots that need it, so some of the segments will stay rough and bumpy for a while longer.  You’ll also have to deal with interruptions in the trail due to construction.

Uh oh…a surprise construction closure means you get to make a detour. At least this part of trail will be brand new the next time you come back.

If you are looking to ride the trail, the good news is that there are many parking lots along the path. Parking lots are shown on the various maps for the trail. Biking to the trailway from somewhere else can be hit-or-miss, depending on where you are. Many of the roads that cross the trail are busy and have no shoulders on them, since this trail goes right through the heart of car-oriented suburbia. The only nearby public transit options are at the south end (the #1 subway at Van Cortlandt Park) or the north end (the Brewster Metro-North station). So transit works well if you want to do a 50+ mile ride. If not, you’ll probably end up riding “out and back” from wherever you parked your car. The only way to do a shorter distance as a one-way ride using transit is to do our Hudson Valley Craft Brewery Bike Tour, where we shuttle you back to the train after riding 35 miles.

When riding this trail, you will also need to carefully think about services, since there are long stretches with no restrooms, stores or restaurants. So you may need to pack a lunch or at least plan where you may want to buy it as well as think about bathroom breaks. This trail is busy, and often times there is little room on each side of the path, so sneaking into the woods to pee isn’t always an option. (Again, another advantage of our bike tour…we tell you where the restrooms are and we arrange a picnic lunch for you.)

A beautiful spot to take a break along the Saw Mill River and observe wildlife.

This trailway also has an interesting relationship with the towns it goes through. Most of the South County Trailway is along the Saw Mill River, often squeezed between the river itself and the Saw Mill Parkway. So these were industrial areas, not downtown areas. Most of the factories are now gone, having left decades of pollution in the muck of the Saw Mill River next to empty brownfield sites, some of which have been redeveloped. One site was redeveloped with a shopping center with a variety of restaurants and a Starbucks. So that makes a good break stop, although you will have to get across the Saw Mill Parkway at a traffic signal.

A shopping center is located on the other side of the parkway from the trail. Cross at the light to get there.

While the South County Trailway goes directly through the downtowns of two villages (Ardsley and Elmsford) the immediate areas surrounding the trailway are still industrial and you’ll need to ride around (on busy roads with no shoulders) to find that Dunkin Donuts with the bathroom or that pizza shop for lunch.  Ardsley is particularly tricky since the only access point to the Village is through a school bus depot and it’s a tangle of roads to get to the main part of town.

The Village of Elmsford welcomes you with this picnic area and bike repair station. There is no restroom here.

The North County Trailway does a little better in terms of taking you through downtown areas with restrooms and lunch places. The old Briarcliff Manor train station was converted into a library, and it is a great stop for a bathroom break (but there are no stores). Further up the line, Millwood has convenience stores, a deli and a supermarket. But perhaps the easiest towns for services are Yorktown Heights and Mahopac since the trail goes right through the center of those places. Yorktown Heights is one of the few places left where an old train station building remains. The local chamber of commerce has also placed maps of the town along the trail to help you find nearby services while also telling you about Yorktown’s other attractions. While there are many choices here, it helps to know where to go since the town is mostly a cluster of suburban shopping centers, many of which have substantial vacancies. Finding a restroom here is also tricky.  Mahopac also has a lot of choices as well as another library right along the trail (another great restroom stop). Food choices in both towns are good, particularly if you like pizza. You get pizza that’s the real deal in these towns, although no pizza shops are directly along the trail. 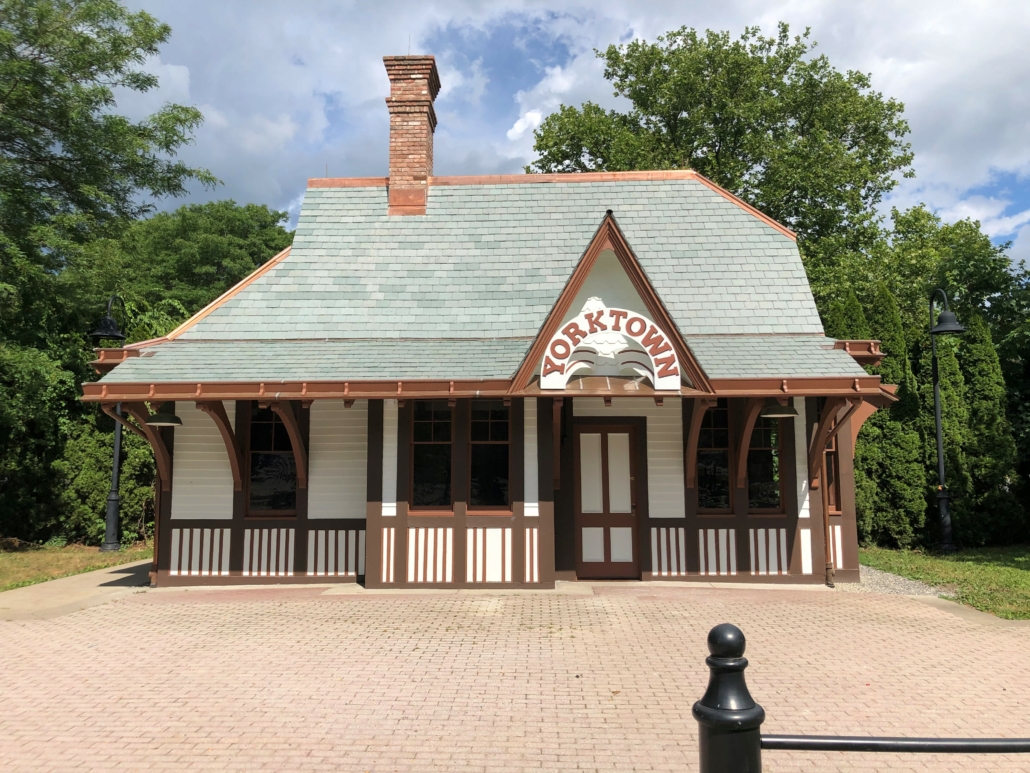 The historic Yorktown train station is currently being restored to its former glory…but it will not have a restroom for you to use.

From Mahopac and north you are on the Putnam Trailway. Although the entire corridor is a relatively flat rail trail, the Putnam Trailway has some of the steeper grades. But you will be rewarded by going through some very densely wooded areas with tall trees that burst into color in the fall.  You will also get to experience a number of tall bridges as well as a causeway that goes across a reservoir. North of Mahopac you’ll go through Carmel, more or less through the center of town, but not always super close to businesses. And again, there are no restrooms along the trail. 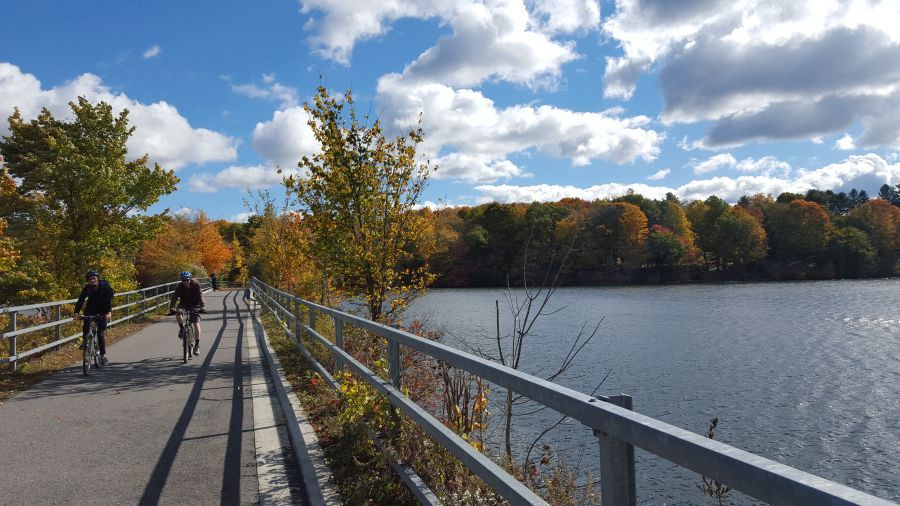 The crossing of the West Branch reservoir is another highlight of this great bike path.

The trailway ends unceremoniously in the Village of Brewster across from Miggins Screw Products and the entrance to the Metro-North rail yard for the Harlem Line. To get to downtown Brewster (and the train station) you will have to ride over a steep hill and then on a busy road to reach the center of the village. There are a number of restaurants and stores here. The Brewster train station also has a restroom, but it is often out of order, so don’t count on it.

The trail ends unceremoniously across from Miggins Screw Products, next to the Metro-North rail yard.