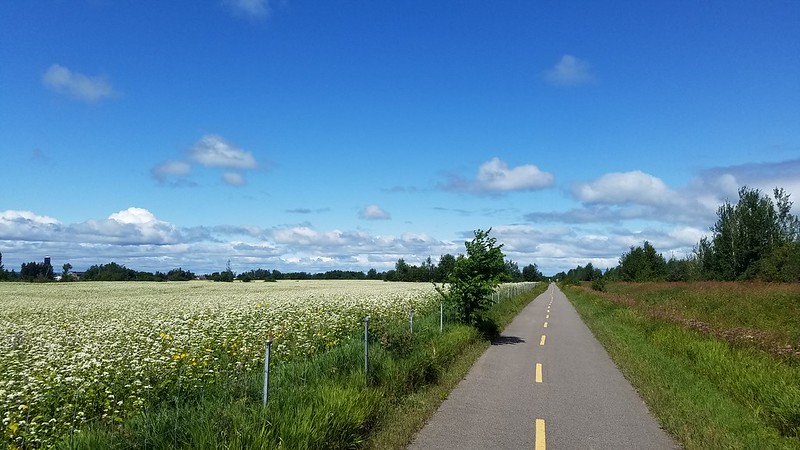 A typical view on the Véloroute des Bleuets.

The Véloroute des Bleuets- or the blueberry route – conjures up an enticing image for most touring cyclists. A circular route that goes around a beautiful lake in the northern wilds of Quebec with endless fields of blueberries. Quebec has long been known as one of the premier cycling destinations in North America, thanks to its comprehensive bicycle route system known as the Route Verte. But this spectacular route has remained relatively unknown to most American cyclists until recently when the Quebec tourism agency stepped up its efforts to promote it in cycling magazines and at travel shows here in America.

While the main Véloroute des Bleuets circles Lac Saint-Jean, the lake also feeds the Saguenay River, which becomes a beautiful fjord as it flows towards the Saint Lawrence River. And of course another cycling route –  the Véloroute du Fjord du Saguenay – goes along both sides of the fjord and connects to the Véloroute des Bleuets. When you combine both systems, you get an expansive network of more than 700 km of cycling routes ranging from off-road pathways to on-street bike routes. 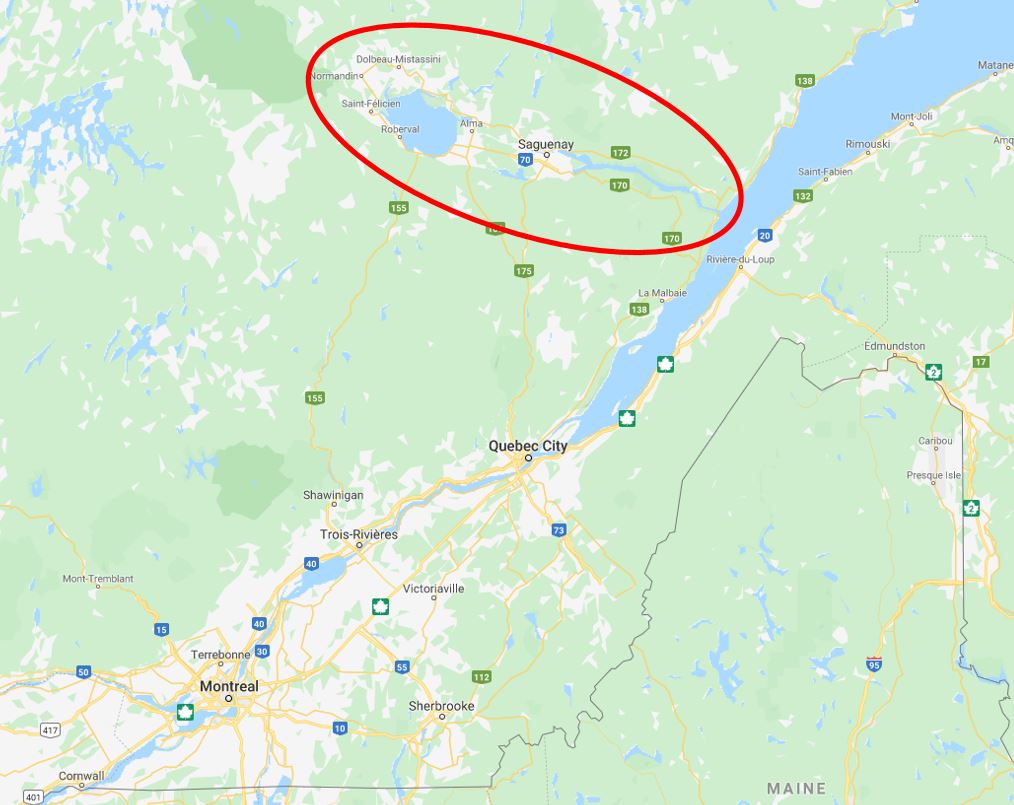 The Véloroute des Bleuets and the Véloroute du Fjord du Saguenay encircle Lac Saint-Jean and the Saguenay fjord in northern Quebec. This remote, yet populated, region is well north of Quebec City, at a latitude just north of the northern end of Maine. It is a substantial distance from New York City.

In addition to being a spectacular bike ride, you’d be hard-pressed to find another region in North America that is more set up for bicycle tourism than the Lac Saint-Jean/Saguenay region of Quebec. Every two years they produce a comprehensive guide in both English and French that details every aspect of both routes including the locations of all accommodations, services, transportation and points of interest. With this guide, you can plan out every aspect of your trip.

But the guide also allows you to leave some aspects of your tour unplanned, since the plethora of information contained in it lets you know your options with each town you ride through.

When I did this tour, I felt I only needed to book one accommodation in advance – a lakefront campsite at Pointe Taillon National Park – since those appeared to be in high demand. For all other accommodations, I had confidence that armed with this guide, I would find a place each night to rest my head. My plan was to camp each night if the weather was good. If not, I’d get a room at a hotel or motel.  There were so many options in the guide, I figured it would not be an issue. So many accommodations were listed as “Bienvenue Cyclistes!” accommodations, meaning they were certified as bike friendly. I would figure it out as I went along. There are also trip planning services that will book your accommodations for you and carry your gear. But you will have to start and end your ride in the City of Alma and you will have to follow a particular itinerary and stay in certain places.

While this all seems easy and straightforward at first, you must first tackle the challenge of figuring out how you will get to such a remote region, especially if you intend to ride your own bicycle. When I met the friendly Quebec tourism folks at the 2019 Bike Expo New York, I asked them about it.  How do I get there? They didn’t really have a good answer other than to drive the approximately 650 miles between New York City and Lac Saint-Jean and park in one of the designated parking areas for the route (of which there are several). But doing this has a number of disadvantages. First, it would lock me in to starting and ending the ride at the same spot, which wasn’t going to work for me since I wanted to do both the Véloroute des Bleuets and the Véloroute du Fjord. It was too complicated to do both without backtracking a substantial distance to get back to the car, which would also add days to the trip which I did not have (I only had a week).  While Equinox Adventures offered a 6-day tour out of Alma that did both the lake and the fjord where I could also get bag carrying services, this was only available for private groups of 4 or more, and I didn’t have 3 other friends to bring with me. Plus, since I am a New Yorker who doesn’t own a car, what am I supposed to do, rent a car to just have it sit in a parking lot for a week?

Fortunately, there was another way, but it involved stitching together a number of bike-friendly train and ferry services. I liked the route offered by Equinox Adventures – a six day itinerary where 3 days are spent going around Lac Saint-Jean, one day is spent riding between the lake and the fjord, one day is spent on the fjord, and the last day to get back to Alma by shuttle. But in my case, instead of getting back to a car parked in Alma, I would go to Quebec City instead by train. There I would meet my wife and son and they would drive me home.  But even if they could not do this, there are ways to get home from Quebec City with a bike using Via Rail to Montreal and then taking it from there (and that’s a story for another day).

So to set this up, even though this route is highly amenitized once I get up there, it would take an enormous amount  of planning. How do I get up there? How do I make sure I can get back? What if something goes wrong and I miss a connection?  This was the first part of the adventure. 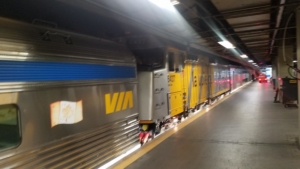 The train from Montreal to Chambord is actually two trains stuck together. They separate halfway and go to different towns. Each half of the train is an engine, a passenger car and a baggage car. So you really get to know the other passengers and crew during your 8 hour journey!

The plan I hatched was to fly from LaGuardia to Montreal on American Airlines.  American now allows bikes that are packed into boxes as checked baggage with just the standard baggage fees (or no fee if you have an American Airlines credit card). So this would be great.  I would fly to Montreal with my bike in a box and unpack and assemble my bike at the Montreal airport using one of their handy bike stations. Then I would ride my bike to downtown (on a great bike path!) and stay overnight at the bike-friendly Hosteling International hostel near Montreal’s central train station. The next morning I would just ride a few blocks to the station and get on an 8-hour train ride to Chambord, 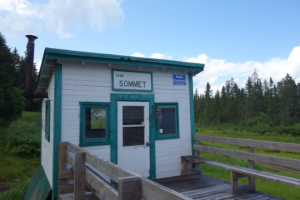 There is a vast wilderness between Montreal and Lac Saint-Jean, and the train goes right through it. It takes 8 hours, and you stop at many train stations like these – mere huts in the middle of the woods. It’s a unique experience you’ll find only in Quebec!

which is right on Lac Saint-Jean. This train ride is long, but the ticket is very cheap ($60 CAD) and the bike rides for free with no box in the baggage car. I’d get in at 4:30 p.m. and then I could either stay the night in Chambord, or if I felt up for it, ride a little on the Véloroute and stay in the next town.

Towards the end of my ride, my plan was to utilize a ferry service to cut some of the riding distance along the Véloroute du Fjord du Saguenay. Since the route doesn’t really go along the water (and is very hilly), I figured it would be worth it to see more of the fjord from the boat and spare myself the hills. I would end my ride on this route in Saint-Simeon and then ride to La Malbaie on the final day. In La Malbaie I could board a scenic railroad –  the Train de Charlevoix – which would take me to Quebec City with my bike. 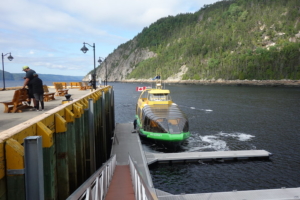 The ferry, which runs the length of the Saguenay Fjord. 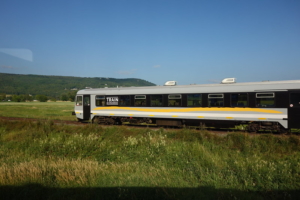 The Train de Charlevoix, a scenic railroad that goes between La Malbaie and Quebec City.

So after spending many, many hours planning this out and making the various reservations for the plane, two trains and a ferry, I was ready to roll. But it turned out that the day of my departure was LaGuardia’s second busiest passenger day of its history (thanks to flight-cancelling thunderstorms the day before). When I finally got on my (massively delayed) flight, more thunderstorms rolled in and the flight was cancelled. This is when the dominoes started to fall. That train between Montreal and Chambord?  Well it only runs Monday-Wednesday-Friday. So now I had to figure out another way to get to Montreal and arrive on either a Sunday, Tuesday or Thursday to get the train. I would also need to re-book the ferry ride, my lakefront camping reservation and the ride back on the scenic railroad. Wow.

The solution I concocted was unorthodox, but it worked!  In fact, it worked better than my initial plan. I would now rent a pick-up truck and throw my bike in the back. I’d drive to Burlington, Vermont on Friday and then I’d spend Saturday and Sunday riding between Burlington and Montreal. This ride would be fantastic – worth the aggravation.  And I will give you all the details in the next blog article!

https://gothambiketours.com/wp-content/uploads/gotham-bicycle-tours-logo2.png 0 0 Laura Willis https://gothambiketours.com/wp-content/uploads/gotham-bicycle-tours-logo2.png Laura Willis2019-12-04 23:22:502019-12-18 20:55:53Cycling the Véloroute des Bleuets in Québec – Part One: A beautiful cycling route that is challenging to get to!